How to Bargain Shop At 99¢ Plus Gallery; A conversation

By Debbi Kenote and Til Will 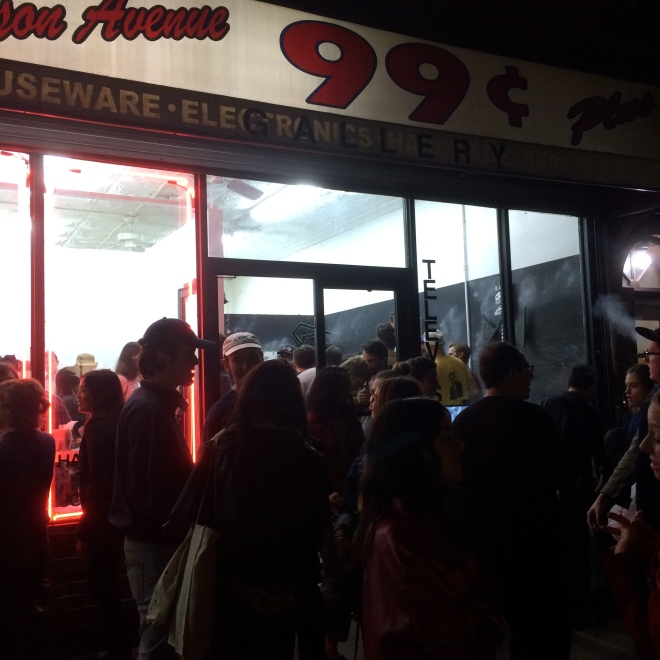 DEBBI KENOTE: What was your impression when you first arrived on the scene at 99¢ Plus Gallery / Hand Job Gallery during the double opening last night?

TIL WILL: My initial thoughts involved strategizing how to get through the door. Do I go for the ‘barge through no regrets’ or do I wait for a lull moment to slip through this human glob gently. Indeed I chose the latter. As soon as I made the squeeze I saw some art obstructed by butts, so I looked around for more art and found it in between someone’s legs. The main exhibition was an impassible gridlock. It had surpassed the realm of art exhibition into a game of twister. I focused more on my interactions with people than with the art–which was maybe the point of this gallery, not sure. Which brings me to my first question for you: What did you learn at the opening?

I discovered that there were over 20 artists in the group show Television on the right side of the split (99¢ Plus Gallery). The wallpaper made the space look like a retail window display. A large scramble of a painting peaked over someone’s head. There was a couch in the back of the room with printed pillows on it. Many humans drinking free IPAs obstructed my view.

It seems we both found the space to be difficult to navigate. Do you think the display of the artwork was part of this issue, with most of it being low to the ground?

TW: To me the display of the artwork is an issue if there is no way to properly look at it. I might have felt differently if there were less people in the gallery. There was very high potential for Joey Watson’s ceramic artwork to be damaged–I wouldn’t be surprised if it did. Ultimately, this risk is disrespectful to artists. It could have been avoided by putting these works on taller pedestals with spot lights so that people were more aware of their placement.

I noticed that the show Television in the main gallery was set up intentionally to feel like a lounge. It was an odd decision to show that many artists in such a small space.

This is a three-fer because I feel these questions are interrelated:

What are your thoughts on the works and display of Television? Do you feel like the exhibition was effective at communicating any ideas and do you think that the artwork was secondary to the social dimension of the show?

DK: The layout of the works did feel like a hang-out space of sorts, somewhere in between a waiting room in a tattoo parlor and an over-crowded art fair booth, filled with glazy-eyed viewers snapping instagram-worthy photographs, to show they too had been there. What struck me was the commitment everyone felt to having conversations in the small space, as opposed to viewing the work and socializing outside. Although some people did do this, few seemed to feel the need to move to let others through, which was strange to me. Were we not all there to look at art? The atmosphere gave the impression that the social aspect of the opening was the priority. Do you think there was some intention behind all of the chaos? Perhaps the social overflow was part of the Television exhibition?

TW: This exhibition may have been curated on the basis of black & white television, but I wouldn’t say that I could relate it to television. I can understand how the couch was set up to face the surveillance screen, so that you would have a narcissistic experience of watching yourself sitting on the couch. To me that is sort of a matter-of-fact demonstration of ‘this is what you do when you sit on a couch.’ I had a hard time with the wallpaper–you’re right that it provided at a retail display feel. To me this was distracting from each individual piece. Yet, I think these curators are more interested in seeing their exhibition as one artwork built out of individual works. It seems to be amply focused on what the objects say together, as opposed to individually. In that respect, it is an innovative method of curating. It becomes hyper-concerned interior design. I am interested to see these curators develop this aspect in future exhibitions, picking and choosing elements in different ways to essentially make paintings out of rooms.

DK: According to the online statement Television was using stationary objects “to both bring people together and transport them to a different time and place.” The online essay also mentioned that Television “allows viewers to view and to be viewed,” which could be what they were getting at with the watch-yourself-sit-on-a-couch thing. Phrases from and names of television shows were spewed in a punctuation-free paragraph at the bottom of the page. I came to conclude that Television was about television (with the help of the couch and tv combo) along with nostalgia and our role in the whole drama. I was left unsure if there was a critique at play. Are television days gone? Do we miss them? Did they shape us for better or worse? That being said, I don’t know if I would have came away with a clearer interpretation with less people in the space. In your opinion, should the gallery have done a better job of making the work accessible?

TW: I believe that it is the responsibility of the gallery to keep the artworks safe from damage, unless said damage is intended. I do not think it is the responsibility of the gallery to make sure there is space to move around. Enforcing this would create exclusivity. I think your point, that people should move out of the space out of courtesy for other viewers, makes the most sense. After all, nothing is a better review than a full house. One could argue that a stuffing the walls is a foolish choice on the gallery’s part. In the end though, one must remember that an art gallery is a business, and galleries have to have a certain number of artworks for sale in order to stay open. In my opinion, a space that size would have 1-3 works total. I would not be proud of a space that had to function by means of crowding the art.

I think your question of whether or not everyone was there to look at art is the most interesting of all. I mean, a quiet day in an empty gallery will usually be a more meaningful viewing experience. In this case though, it brings up an entirely different dimension of accessibility that we wouldn’t have otherwise addressed.

DK: Overall, what did you get out of Television?

Final question for you. Why did you like Joey Watson’s sculptures and where do you think they fit in to the whole floral/neon trend happening in contemporary art that you have mentioned before? Where do you think this aesthetic comes from?

DK: I’m not sure I am fully sold on the work. That being said, I did appreciate aspects of it: the strangeness of them, the reference to both ceremonial objects and small structures. Some felt like constructed forms on a landscape: the hilly structure, the  tower, and so on. Foreign forms from a psychedelic parallel world. Ceramics played into this in an interesting way, through their history as functional objects, often involved in ceremonies and reflecting the fingerprint of the maker and the time. Perhaps the colors (heavy use of pastels) got my West Coast bones a little excited. And yes, there were certainly some trends surfacing. The abstract objects did appear to feel bright like neon and had aspects of flora and fauna. The use of fake grass and protrusions that looked like underwater coral reefs aided to this. It all took on a psychedelic feel with the crystals and rainbow pastel colors.

I’m not sure where it comes from. Are the 80s and 90s children all nostalgic for Liza Frank? Does it have something to do with the boom in neon sign sales throughout our country? Or perhaps those who buy art are tired of the diverse and sometimes dark stories that artists tell, reflecting the shambles of a political situation in our nation. Maybe art buyers want something bright, light, fun. The art world decides who makes good art, or at least, who they will pay for or show. Neon bulbs are hanging out of paintings in Chelsea, and art stores can’t restock the shelves of their flash paints quick enough. Yet, I make bright work myself, and it is for different reasons. Something of the falsely projected utopia in it, that I see around me dripping off billboards, speaks to me and reactions surface. Are others doing the same?